One of Andheri’s plushest towers, the 36-storey Oberoi Sky Heights in Oshiwara, has received a notice from the BMC for irregularities. According to the BMC, smaller flats have been amalgamated to create larger 3- and 4-BHK flats without requisite permissions. As the developer and housing society could not provide any documents to show the authenticity of the alterations, an order has been issued to demolish the illegal portions, a senior civic official said.

According to the BMC, which inspected the building last month, flats in the building have been amalgamated, passage areas have been included as part of the flats and a string of other unauthorised alterations and additions have been carried out.

Each floor of the building, which was given an Occupation Certificate (OC) in 2008, has six flats. The BMC had first issued a notice to the developer Vikas Oberoi under Section 53 (1) of the Maharashtra Region and Town Planning (MRTP) Act in April this year.

However, since neither the developer nor the housing society could prove the legality of the amalgamations, alterations and additions, the BMC passed an order to restore the building to its legal state, failing which the unauthorised portions will be demolished. 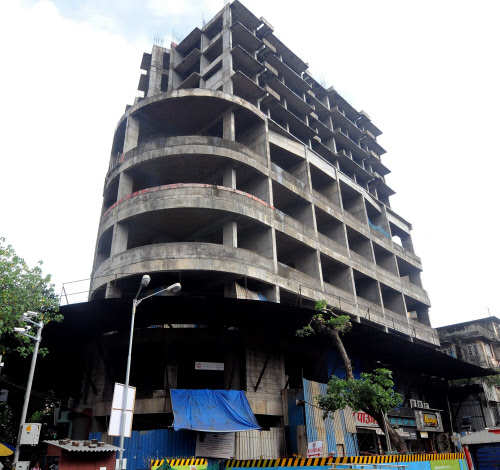 Mumbai: Activists allege irregularities in allotment of flats in redevelopment of cessed buildings

If the society now fails to get the irregularities rectified, the BMC will prosecute the developer and the office bearers of the society.

“You are hereby directed to restore the said premises as mentioned in the referred notice immediately, failing which you will be liable for prosecution under the said Act. Further, the unauthorised work will be demolished at your own risk and cost and without any further notice,” reads the BMC’s order, issued by the Building and Factory department of the K West ward, a copy which is with Mumbai Mirror. The notice was issued on August 3.

A BMC official said that while the society, in its reply to the notice, claimed that there were no violations, they could not provide any permissions from the Building Proposal department to support their claim. “The society claimed that they had applied to the BMC’s BP department to get the violations regularised and have appointed an architect. However, so far, none of the illegalities have been regularised,” the official said. In a letter to the BMC in April this year, society secretary Sunil Vazirani claimed that the irregularities were approved by the then municipal commissioner.

In a reply to the BMC’s notice, an official from RS Estate Developers, which completed the project, said that it had constructed the building as per approved plans and obtained an OC in 2008. “The building has also been duly handed over to the society in 2009 and we are not involved in the day-to-day affairs of the building,” the reply said.

Oberoi Realty and the Oberoi Sky heights CHS did not respond to a detailed questionnaire from Mumbai Mirror. Prashant Gaikwad, Assistant Municipal Commissioner, K-West ward refused to comment on the issue.
‘Land meant for affordable homes’

Congress legislator Aslam Shaikh, who was pursuing the issue, said that he would take up the issue with the revenue department and the Anti-Corruption Bureau (ACB). “The building has come up on land meant to house middle-income people and for affordable housing. Smaller flats meant for affordable housing have bene merged into larger flats. There has been a loss of revenue to the state. There must be a high level probe into this by the BMC and the ACB,” Shaikh said.

Interestingly the building is one of those which were listed by BJP legislator Ameet Satam in the alleged Rs 50,000 crore building proposal scam. In April 2016, Municipal Commissioner Ajoy Mehta had ordered a probe after Satam alleged in the state legislative assembly that 26 “corrupt” municipal officials and engineers had cleared the building proposals of certain developers, while delaying the projects of other firms and organisations. Oberoi Sky Heights was one of the buildings named.