MUMBAI: With self-redevelopment of housing societies gathering steam, Mumbai District Central Co-operative Bank has become the first bank that has decided to grant loans for even self-redevelopment of slums and dilapidated cessed buildings.
As reported by TOI last week, self-redevelopment keeps the builder out of the project and residents themselves appoint a contractor and project management consultant to redevelop their properties. 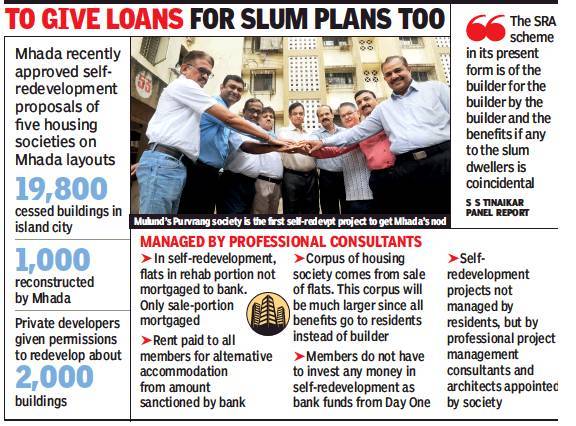 In the board meeting held on July 31, the bank decided to fund such schemes. “A policy is being currently prepared by housing expert Chandrashekhar Prabhu to approve such projects,” a senior bank official told TOI.So far, the bank has sanctioned Rs 52 crore and given in-principle approval to sanction Rs 770 crore to redevelop 19 housing societies.

Another 537 housing societies in the city have held general body meetings to go in for self-redevelopment.

A committee under the chairmanship of S S Tinaikar appointed in 2000 to review the SRA schemes had opined that the scheme be replaced. “The SRA scheme in its present form is of the builder for the builder by the builder and the benefits if any to the slum dwellers is purely coincidental,” said the report.

Recently, the owners of Parshuram Wadi in Prabhadevi and 165 tenants had a series of meetings and resolved for self redevelopment. Tenants of three buildings at C P Tank were brought together with their landlords to jointly redevelop their buildings. Similarly several buildings in Shivaji Park, Dadar Hindu colony, Matunga and Sewri have also come together.

“Condition of buildings acquired by Mhada under chapter VIII A have deteriorated due to the provision in the chapter forbidding sale of surplus area to outsiders. In these buildings tenants who cannot afford to buy extra area will now get 500 to 600 sq ft free while those who can afford to buy extra area can buy it at discounted prices,’’ said Prabhu. “Those availing of extra area will pay for the total cost of the project. In an area where the selling price is Rs 45000-50000 per sq ft, tenants can get it at Rs 10,000-15,000 per sq ft,” said Prabhu.